Based on additional weather forecast data, USBR has made the decision to defer the planned spillway release. The target release rate remains unchanged at 2,000 cfs but the initiation is dependent on the observed precipitation over the next 24-48 hours.

January 12, 2023, United States Bureau of Reclamation (USBR or Reclamation) met with the Santa Ynez River Water Conservation District and other local agencies.  As of January 12, 2023, Cachuma Reservoir was nearing capacity and approaching the point of uncontrolled spilling over the dam.  Reclamation's planned spillway release of approximately 2,000 cfs is a flood control effort to protect lives and property along the Santa Ynez River downstream of Cachuma Reservoir.  The plan adjusts as needed based on the weather forcast and actual percipitation received.  Reclamation notified us of a planned release expected to commence on Saturday, January 14, 2023 at 10:00am. The release timing may be adjusted.

This release is not a downstream users water rights release like the summer/fall releases that are requested and managed by Santa Ynez River Water Conservation District.

These photos, provided by Reclamation, give you a sense of the naturally occuring turbidity in the Santa Ynez River mainstem downstream of  Bradbury Dam and the debris that has floated to the upstream face of the dam near the spillway, which will also end up in the river mainstem independent of when spillway releases are made.

Here is a LINK to  Reclamation's Cachuma Daily Operations Table: a daily summary of storage, inflows, and quantity of water released by outlet location from Cachuma Reservoir.

Here is a LINK to January 2023 Storm updates, preparedness, and Recovery Resources.

The County is working to gather resources for community members impacted by the January 2023 winter storm event. In the coming days, this ReadySBC.org  January Storm Recovery webpage will be a source of information, including links for wellness counseling support, housing assistance, information to aid in rebuilding, permitting, hazardous material clean-up, loss of business or employment, and other topics.

If you haven't registered for emergency alerts, please do so at ReadySBC.org.

(LINK TO PRESS RELEASE) Santa Barbara County Sheriff Fly Over Santa Ynez River  - The Santa Barbara County Sheriff Department's Air Support Unit will be flying its helicopter along the Santa Ynez River on Friday and Saturday. The helicopter will provide evacuation warnings to those occupying the Riverbed, as there is another storm system anticipated to land in the area this weekend. 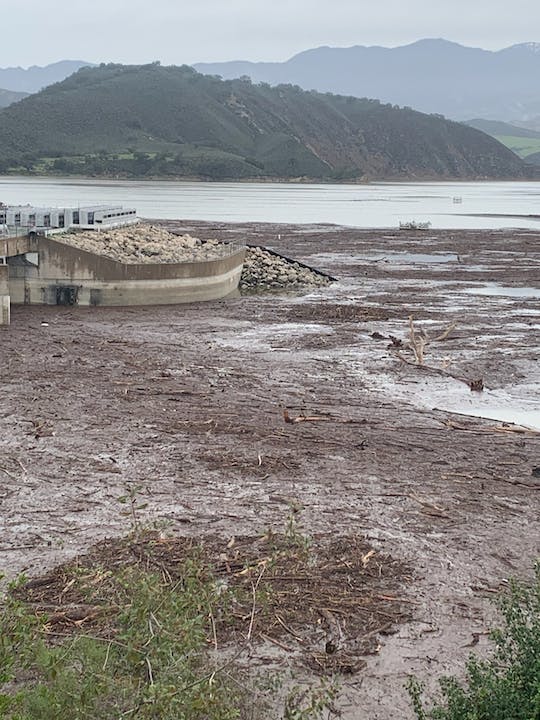